Shock The Muscles Into Change:

Arnold always believed that the body was amazingly adaptable and could “accustom itself to workloads that would fell a horse” 1. The primary variable Arnold used to shock his arms into new growth was change. Since they are one of the smaller body parts, are used often and are involved in almost everything we do, the arms, and especially the forearms, can be very stubborn and resistant to growth.

Even continuing to train at a very high intensity will likely elicit no new gains if that is all that is done in the same manner, during the same routine, day in and out.

Arnold advises shocking the arms by “training with more weight than usual, doing more reps and/or sets, speeding up your training (lifting becomes more forceful as a result), decreasing the rest between sets, doing unfamiliar exercises, doing your exercises in an unfamiliar order or using intensity techniques” 1.

“Shocking method was extremely important to my training. Your muscles tend to become complacent and resist growth if you are constantly doing the same workout for them. But if you try all different types of training methods, exercises, weights, set-rep combinations and training tempos, you keep the muscles off balance. They sort of say to themselves, ‘Wow, there’s a new thing here. He just did 10 sets of 20 reps, and the next workout he’ll do 20 sets of five reps. I’ll never get used to this. I can never build up a resistance to the training, so I guess I’ll have to grow!’”

For the workouts outlined in this article, it is suggested that each session is approached differently. Whether an additional set is done one workout, the tempo is increased for all sets for another, the exercises are switched around or the rest between sets is decreased one workout and increased the next, the overarching goal for each session is to avoid muscular resistance to growth and that means keeping the muscles constantly guessing as to what each new training stimulus will bring.

In this regard, the programs featured here are to be used as a foundation to be manipulated accordingly. It is suggested that each program be used “as is” one week with several of the aforementioned changes made over three subsequent weeks, before once again resuming the program in its basic state.

The intensity methods Arnold mentions, also to be used periodically over your three-week ‘change’ period are:

To be used very occasionally, forced reps are employed by having a training partner assist you with a final rep that would otherwise be impossible to achieve on your own. Again, a very high intensity way to shock the muscles that is to be used sparingly: perhaps once every second workout for one set per exercise.

With arm training, with the exclusion of lying triceps work, partial reps can be completed without the assistance of a partner and require a continuance of reps despite the onset of muscular fatigue. For example, upon completion of a set of barbell curls continue with partial (half or quarter reps) until the bar can no longer be moved even an inch. Again, use this technique sparingly.

To shock the arm muscles these can be done two ways: the negative (or lowering aspect of the repetition) can be emphasized in the normal course of the workout rather than just to set up the contracting (or concentric) part, or a partner can assist a forced negative at the end of a hard set.

For partner assisted negatives, have someone assist you on the upward phase of the movement and complete the negative on your own: do two to three such reps and then have your partner rack the weight.
While emphasizing the negative can, and should, be done often, the forced negatives can be done every second or third arm workout to really stretch out the muscle fibers and assist new growth. Negatives will also build ligaments and tendons faster compared to conventional reps and, in the long run, this will enable the muscle to lift heavier weight, which will translate into new growth.

Aside from his patented controlled cheating (a shocking technique he would employ to stimulate his arms to exhaustion), Arnold was a stickler for perfect technique. Robotic in his actions and transfixed on completing all sets in the same manner each and every time, Arnold’s training form was predictably perfect and ultra-effective.

Although he advocated occasional cheating for bicep curls (as a specific method in itself, to be explained shortly), Arnold also stipulated perfect form as a rule.

To fully isolate the biceps muscle when curling, Arnold would advise newcomers to perform this movement with their backs against a wall. When doing strict curls he believed that the arms, and only the arms, were to do the work. Any other muscular involvement would dilute the isolating effect the exercise aimed to achieve.

“You also need to find the right groove, and do any curl movement through the longest range of motion,” says Arnold 1. “When you do a curl you must bring your hand directly up to your shoulder. If you change that line an inch to the inside or the outside, you are taking the stress off the biceps and you won’t get the same results 1.” And the same thing applies to triceps and forearm training. Engage each rep through its full range of motion in a controlled fashion for optimal results.

Still on the subject of curling (the secret to Arnold’s phenomenal biceps development) Arnold believes that handgrip is all-important. “Another mistake I see all the time is starting off a curl movent with a wrist curl – bending the wrist back, then curling it up just before engaging the biceps,” says Arnold 1. “All this does is take stress away from the bicep by using forearm strength rather than biceps strength, and the result will be huge forearms and mediocre biceps 1.” 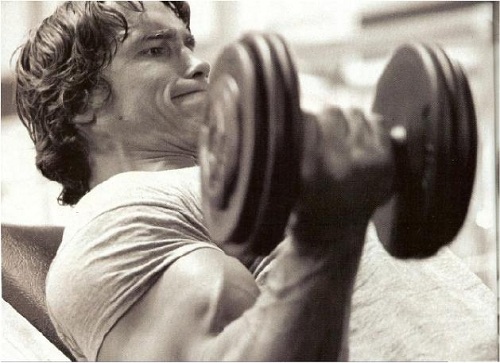 “When you do a curl you must bring your hand directly up to your shoulder. If you change that line an inch to the inside or the outside, you are taking the stress off the biceps and you won’t get the same results.”

A seeming contradiction to the previous principal stipulating perfect technique, cheating is nevertheless an effective way to fully tax the muscles and is especially efficacious when applied to arm training. In fact Arnold was one of the first advocates for cheating and his mentor, Joe Weider, standardized it as one of his Weider training principals.

Arnold’s specific brand of cheating was controlled and this “controlled cheating” term is far from oxymoronic. Says Arnold: “Cheating is used to make the exercise harder, not easier 1.” For barbell curls (featured in the programs outlined in this article) cheating is applied in the following manner, as explained by Arnold:

“Say you are doing a heavy barbell curl. You curl the weight up five or six times, and then find you are too tired to continue to do strict reps. At this point you begin to use you shoulders and back to help you in the lift slightly so that you can do another four or five reps. But you cheat just enough so that you can continue the set, and your biceps continue to work as hard as they can.

By cheating you have forced the biceps to do more work than they could have done without help from the other muscles, so you have to put more stress on them, not less 1.”

The cheating method can also be applied to dumbbell curls and other curling variations.