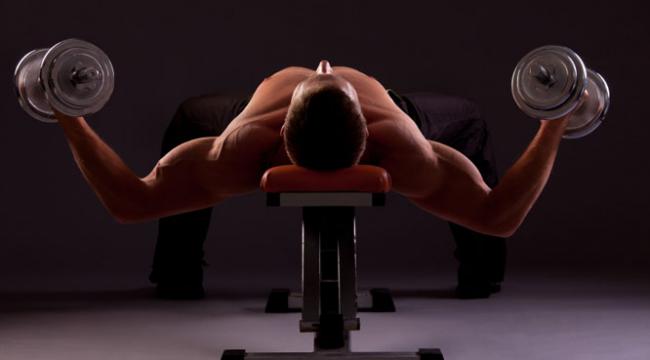 ‘Do Less’ in a workout session is one of the thumb rules for skinny people. They need to follow such powerful muscle-building workout protocol that’s packed much muscle to their bodyframe while spending little time at gym to keep adequate recovery time for muscle to grow.

Positions of Flexion created by Steve Holman, can be a giant step to reach your muscular potential as quick as possible. POF is a very logical and straightforward way to train, one that’s based on muscle function rather than convention.

Positions of Flexion (POF) is a simple concept based on real science that attacks each muscle group from different angel with full range of motion to trigger maximum fiber recruitment, as well as other anabolic mechanisms, at every workout. That means faster, more complete development from fewer sets.

The underlying concept of POF is simple: If you hit a muscle from a number of angles, you stimulate more fibers, and if you use a stretch- position exercise correctly as part of the full-ROM approach, you bring even more of the muscle into play. However, the angles shouldn’t be random—they should complement one another so together they complete the full-ROM chain.

Breaking Down POF with the Austrian Oak

POF is a multi-angular bodybuilding protocol that trains a muscle in the three positions that constitute full range of motion (ROM). Understand that it’s not simply doing an exercise through its complete stroke, although that’s important too. It takes two to three exercises to work a muscle through its complete arc of flexion, or range of motion, which consists of three positions: midrange, stretch and contracted. 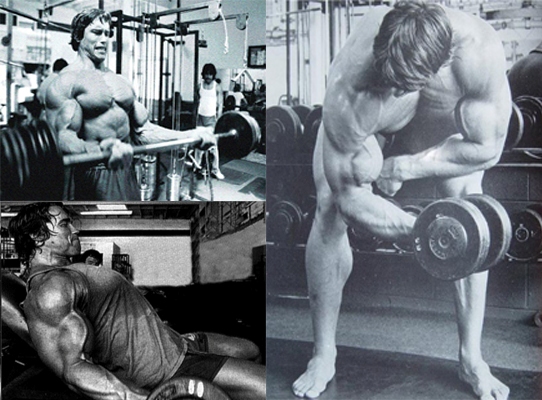 Arnold’s favorite biceps routine is a specific example of standard POF. He often did dumbbell curls, incline dumbbell curls and concentration curls, in that order, a routine that hits his biceps from the three key positions, or angles, for complete ROM:

You can see why POF works, and why it creates a skin-stretching pump in only a few sets. You totally stimulate the muscle fibers by triggering the stretch reflex as part of a routine that trains each bodypart through its complete range of motion or arc of flexion.
Muscle physiology dictates that full ROM and the myotatic reflex will combine to ignite an extreme hypertrophic adaptation, especially after a compound or midrange, exercise that overloads the target muscle due to synergy or help from other muscle groups.

Let’s start from the top, with the midrange position.

Midrange Position: Training the Mass of the Muscle

The first exercise in a standard POF approach is a midrange movement. These exercises are known as the mass-builders because they train the majority of the target-muscle fibers with heavy weight, so it makes sense to give them priority most of the time. Midrange movements involve synergy, or muscle team work, which means that a number of muscle structures work together, with the target muscle as the prime mover. For example, the squat is a midrange exercise for the quads, and the glutes, hamstrings, lower back and even calves get in on the action to help the quads elevate heavy iron.

Synergy allows you to cultivate tremendous power because muscles work most efficiently as part of a team. POF midrange movements all have synergy, and using those exercises alone for each bodypart can build phenomenal muscle size and strength. You can get even better results, though, when you follow your midrange exercises with movements for the other two target-muscle positions, stretch and contracted.

Stretch-position movements, the second exercise in standard POF protocol, activate the myotatic reflex. Training the target bodypart at its maximal point of elongation, for example incline curls for the biceps or overhead extensions for the triceps can force an emergency response from the muscle and bring new muscle fibers into play.

When you use a stretch-position exercise, such as flyes for the chest or pullovers for the lats, the target muscle reacts with an emergency response, which can trigger more muscle fibers to fire. The reason an emergency reaction occurs is that you re training the muscle in a somewhat vulnerable position—at a point of full elongation.

You’ll really feel these exercises in the target muscle, especially when you do them after a big midrange movement. The pump and burn will be unreal—and in some cases almost unbearable—but you re not done yet. To finish off the target muscle and complete the full-ROM chain, you follow the stretch-position exercise with a contracted-position movement for that final growth jolt.

The last exercise in any standard POF bodypart routine is the contracted-position movement, which trains the target bodypart at the point of complete contraction with resistance—for example, leg extensions for the front thighs. An exercise with resistance in the completely contracted position is the best way to finish off a target muscle after as many fibers as possible have been activated with the midrange- and stretch-position movements.

You can develop your own POF routines for other bodyparts by taking an exercise from each of the lists in the sections above and doing one to three sets of each.

‘Positions of Flexion’ is undoubtedly one of the most logical, efficient muscle-building methods out there. It’s helped a multitude of bodybuilders push beyond their so-called genetic limitations, and it can do the same for you. Try it in its standard forms or some variations. If you’ve never tried POF, be prepared for some unusual soreness—and some exciting new muscle growth. You’ll soon see why it’s becoming an integral part of so many successful bodybuilders training arsenals the world over.