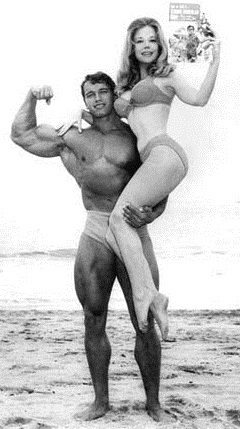 The undisputed King of Bodybuilding, the man known in iron circles as the Austrian Oak, Arnold Schwarzenegger, undoubtedly built one of the best physiques the world has ever seen, so much so that 28 years after he last set foot onstage, people still talk about his bodybuilding accomplishments in revered tones.

Although known for having an aesthetic body with muscle in all the right places, Arnold did have certain exceptional body parts. Indeed, what was particularly impressive about Arnold’s amazing physique was his legendary arm development, clearly some of the best of all time regardless of era.

When it came to demonstrating the best arms of his era, Arnold was the perennial winner; there was no real competition for him in this area. Sure, some competitors had slightly better balance, others had greater fullness and a few had superior shape, but Arnold had all of these attributes in perfect measure, a significant reason why his front and rear double biceps poses are, according to many, the best of all time.

So how did Arnold build his own mini versions of Mt. Olympus? If you look at very early photos of Arnold flexing his arms, you can see that, although they did have reasonable shape and size for his age, they were far from perfect or what one might call genetically gifted. 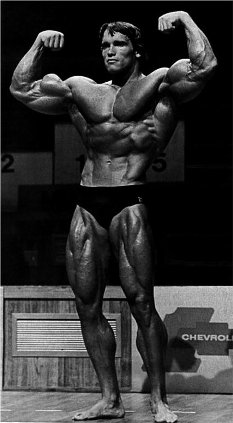 To build the massive upper appendages that allowed him to win seven Olympia titles, Arnold had to employ every trick in the bodybuilding book. And there is one thing we all know about Arnold: he would move mountains, and occasionally envision his arms as such, as he sought to develop his body to perfection.

Training arms Arnold-style was not simply about hitting the gym and doing a few finishing sets, or limiting the intensity applied to them so as to not overdevelop this area and potentially throw his proportion off. Not Arnold.

He hit every body part with mind-numbing intensity and developed every muscle group to its maximum. Arms were no exception. As with all body parts, Arnold used a number of effective techniques to adequately stimulate his biceps, triceps and forearms.

What follows is a detailed look at exactly what arm-training techniques Arnold employed, what exercises he favoured and why, a program based on the Oak’s methods and one he himself used along with principals that you can use to develop your own massive guns.