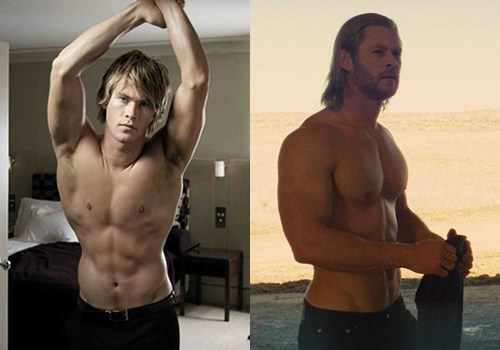 ‘It was certainly exhausting at times, but I prefer to be training than not. It gives me more energy and I just generally feel better about myself. I feel like I’ve earned that beer at the end of the week.’

When Thor, the Norse god of thunder, was adopted as a Marvel Comics hero, the character’s powers – aside from his immortality – were his superhuman strength, speed and durability. So making the leap from page to screen would require someone whose physique was more fitting of a deity than a mortal. Step forward Australian actor Chris Hemsworth, who will play Thor in one of this year’s most eagerly anticipated action movies.

‘In the comic strip Thor looks to be around 500lb [227kg], so obviously that wasn’t my goal, but it was very important for me to look the part and be as powerful as strong as I could while still maintaining that element of agility,’ Hemsworth tells .

The £93m-budget blockbuster, which is directed by Kenneth Branagh and hits UK cinemas on 27th April, sees Hemsworth play the titular hero – a powerful but arrogant warrior whose reckless actions reignite an ancient war.

To help him get into superhero shape, Hemsworth recruited the assistance of Michael Knight, director of Michigan-based personal trainers Art of Strength. ‘Chris’s regime was split into two parts,’ says Knight. ‘The first was a bodybuilder-type protocol focused on high-weight, low-rep moves designed to pack on maximum size, while the second was total-body circuits designed to shift his excess fat while maintaining muscle.’

Hemsworth admits getting into superhero shape was hard work. ‘The kettlebell routines that Mike put me through were intense, partly because I’d never used them before but also because it’s a heavy combination of cardio and weightlifting,’ says the 27-year-old former Home & Away star. ‘Most of my training previously was geared more around cardio – mainly boxing and Muay Thai, with some elements of weights. I hadn’t experienced kettlebells, but it’s a great way to build functional strength.’

As if Hemsworth‘s training wasn’t tough enough, he had to start the programme while filming another movie. ‘When I started working with Chris he was doing 12-hour days on the set of Red Dawn, but he still had the time and energy to train for between 60 and 90 minutes five days a week after his shooting commitments were over,’ says Knight. ‘Above all, he has an amazing work ethic, always pushing himself further and harder. It shows that if you’re prepared to work hard you can get the results you’ve always wanted.’

Hemsworth adds, ‘It was certainly exhausting at times, but I prefer to be training than not. It gives me more energy and I just generally feel better about myself. I feel like I’ve earned that beer at the end of the week.’ 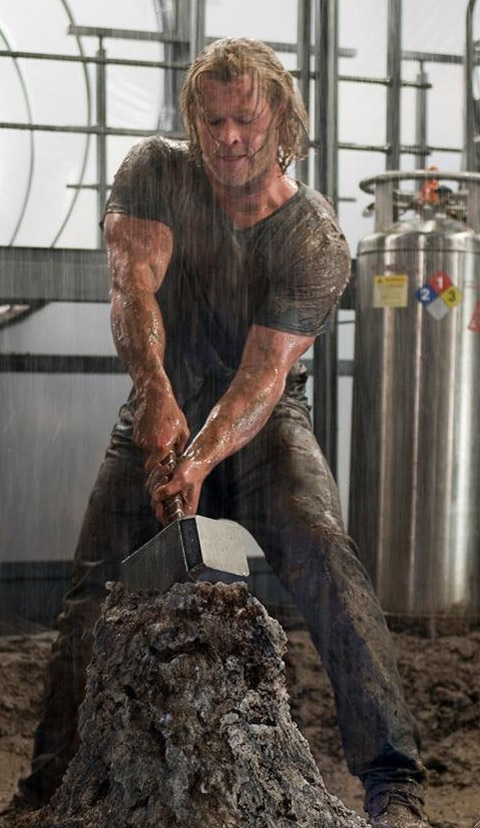 Session one – chest and back:

‘Once Chris put on the muscle I needed to get him lean, which meant stripping away any fat he had accumulated during the first phase while maintaining all his newly built muscle,’ says Knight. ‘I did this by getting him to do this total-body circuit based around classic strongman moves, such as log presses, tyre flips, sledgehammers and prowler sprints, as well as circuits  with kettlebells of varying weights.

‘This got Chris down to his fighting weight of 220lb [100kg] – and as you can see from the pictures, it was all muscle.’ Hemsworth adds that he kept a ‘very close eye’ on his diet. “It was a lot of protein shakes, chicken breasts, a lot of calories, food and working out. I’ve tried to get as much rest as I can, that’s the other third of the equation. I put on about 20 pounds, and then lost a lot of it since shooting, because I wasn’t eating that amount.“

After the 2-part workout, Hemsworth was pure muscle. Partnered with his strenuous workout is a strict bodybuilding diet that is composed of clean protein, carbs, fruit, vegetables and 4-5 liters of water per day.