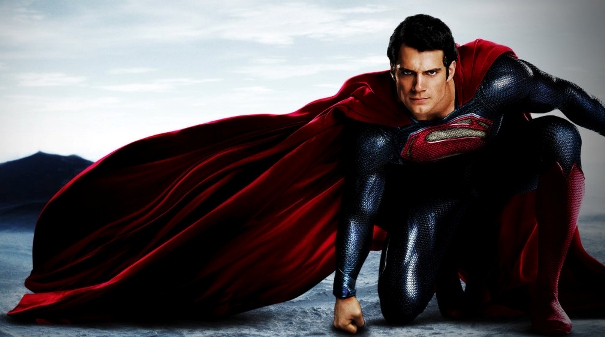 Henry Cavill plays the muscular Superman in the latest film Man of Steel. How did he get that body? What was his workout routine? What was his diet like? How many calories did he eat?

The intense “Man of Steel” workout described by Henry Cavill as “hell and wonderful at the same time” has finally been revealed as part of a promotional tie-in with The National Guard. The 30-year-old British Actor is shown throughout the short video performing a variety of exercises to get him into Superman shape – all courtesy of Hollywood fitness expert Mark Twight.

“Mark Twight is probably one of the most incredible people I’ve ever met,” Cavill says. “He’s opened my eyes to seeing past what I thought were my limits. He’s a remarkable man, truly. He understands what I’m going through physically. He understands me because he sees what I’m going through as a person, which I think is what makes him such a good trainer.” 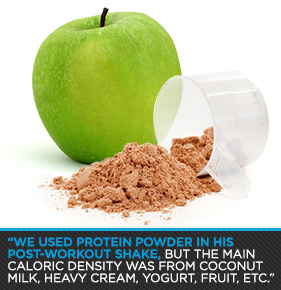 Cavill adopted 5,000 calories per day diet in the beginning of his training to add 20 pounds of muscle to his frame. “I’m on 5000 calories a day… You’ve got to eat protein first, then a little bit of carbs … you’ve gotta keep your hunger levels going” he told. His trainer Mark Twight explains that during a movie project they are in control of the diet, because otherwise the training doesn’t matter.

The trainer says the caloric intake was excessive in the bulk up phase. That meant “we used protein powder in his post-workout shake, but the main caloric intake came from coconut milk, heavy cream, yogurt, fruit, and stuff like that.”

“As far as the supplementation goes, I’m not a big believer. In terms of what we had Henry use, it all came down to a basic multivitamin, a lot of essential fatty acids—he was going through the Udo’s Oil in liter volume—a probiotic to help digest that fat intake that he had, and magnesium. The magnesium, a product called Calm, he would drink at night to coast into sleep.” Mark added.

Once he added on the weight, Cavill said the hardest part of his training was sculpting it by reducing his eating regimen. “The leaning down phase is the hardest because although you’re looking great, you’re always in a bad mood because you’re so hungry” he told. 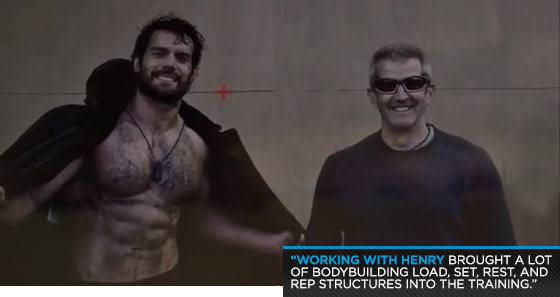 “My trainer Mark Twight gave me a whole bunch of workouts to do by myself to get my fitness levels up. I’m training two and a half hours a day, pushing my body beyond its normal limits, putting on a lot of muscle mass and just making myself look like Superman.”

Here is a great clip of how the actor playing Superman got into top shape with the Soldier of Steel training.

After being so disciplined for the better part of a year, Cavill rewarded himself. “The biggest treat was after a six-week phase when I was getting in shape for shirtless scenes,” he told. “After that, Zack Snyder bought me an amazing apple pie and a tub of ice cream. Then I ordered a pizza as well, and didn’t even go home — I just sat in a trailer afterwards and ate it. I passed into a food coma after that.”

Are you interested in transforming YOUR body with an aggressive exercise program designed by Mark Twight, trainer of Hollywood’s biggest stars? Well you are in luck. Mark is sharing some of his training routine with us on Soldier of Steel website. This is such an amazing opportunity. The training routine that you can download not only has a month of exercise routines but includes descriptions and photos of the exercises.