[box type=”important”]Fair warning: This workout was not designed for you. It was structured specifically for Jason Statham at a certain point in time to account for his goals, his lifestyle, and his conditioning level.[/box]

Following Routine is not Jason’s training program, but rather a snapshot of one week in a much longer progression of training. Jason’s regimen is continually manipulated to account for the many outside factors that can influence progress.

These factors include but are not limited to nutrition, sleep quality, recovery, career demands, and physical injuries. So consider the pages that follow to be a 7-day glimpse at Jason Statham’s ever-evolving workout.

The objective of this workout is to build pure strength in one of the most effective total-body lifts: the deadlift. To accomplish this, we have Jason work his way up to his one-repetition maximum (1RM) — the heaviest weight he can lift one time. Before he begins, though, he completes a two-part warm-up session.

For this, Jason completes 10 minutes on the Concept 2 rowing machine at a pace that’s less than 20 strokes per minute (SPM). (Jason’s distance on this day: 2,274 meters.)

This involves just one exercise, the deadlift. Jason starts with a light weight — about 35 percent of the amount of his 1RM — and then slowly starts adding weight and reducing repetitions. As the weight becomes closer to his 1RM — which, for Jason, is more than twice his bodyweight — his rest between sets increases to 3 minutes. This allows for nearly complete recovery between lifts. Remember, these are the weights that Jason uses. They should be determined based on individual ability. 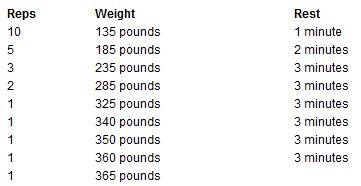 10 minutes on the trampoline. Jason uses a full size 10×17 foot gymnastic trampoline for 10 minutes of freestyle aerial work. Jason has an Olympic diving background so he’s doing fairly advanced movements here. In addition to fine-tuning motor skill the trampoline is supposed to be good for your lymphatic system and flushing toxins from your cells.